Home Blog How to Select a Good Watermelon with pictures (Updated)

Watermelon is the fruit of summer and it is so refreshing and satisfying to have on a hot day. It is considered the “lycopene leader” among fresh produce. Lycopene is an antioxidant which gives fruits and vegetables like red grapefruit and tomatoes their red color. Watermelon comes in different varieties. ‘how to select a good Watermelon #MakmigrofarmsWatermelonTips #healthyfoods #healthylives

It can be very tricky to find out how the inside of a watermelon looks like at just a mere glance, because of its thick rinds but if you know what to look out for, you stand a better chance of selecting a good one.

Some  months ago, we posted on our Facebook page some features to look out for to select a good watermelon (do you remember that post?) There were a lot of questions, comments and insights on that post, we appreciate them a lot. This article is an updated version of our watermelon post on Facebook.

How To Select A Good Watermelon

Look out for a uniformly shaped, firm watermelon free from major bruises, dents or scars (Very important) Some minor scratches may be ignored since the thick rind of watermelon protects the fruit. Avoid watermelon that has major bruises or cuts.

Read Also: 7 Amazing Reasons Why You Should Eat Watermelon Seeds And How to Use Them

Look for a watermelon that is slightly dull green in color. If the watermelon has a very bright shiny green color, it may be underripe.

Turn it around and look for a creamy yellow spot (varieties differ as far as how big the spot will be) not a pale or white color spot. A very deep yellow color may mean an overripe one and may be bad inside.

To a farmer, a dried, brown curly tendril and a “spoon” leaf indicates a ripe watermelon.

“Webbing” (yes, there were a lot of controversies around this too) shows that bees touched the pollinating part of the flower and it is believed that it is best when watermelon (fruit) is pollinated by bees. 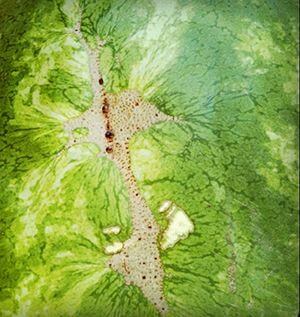 When ready to prepare, don’t forget to rinse the outside rind with cool running water before cutting into your watermelon. This is because the knife transfers any germs or bacteria that may be on the outside into the melon. And now you’re ready to enjoy your watermelon.

To remove rind from the entire watermelon, cut off both ends just until you reach the pink flesh. Using a sharp knife, slice from the top to the bottom just where the flesh meets the skin and cut  into rounds, triangles, stars, slices, cubes as you desire.

How To Store Watermelons

Read Also: How to Select a Perfect Cantaloupe So now you have all these tips, you can shop for your delicious watermelon without any doubt. Did you try the other techniques from our previous post? Did it work for you? Kindly let us know. Thank you so much for reading.

Remember to kindly Share this article to others on the platforms below ↓.

Here Is Why You Should Take Hibiscus Tea/Drink And How To Prepare It.

Is It Good To Drink Palm Wine?

Here Is Why You Should Take Hibiscus Tea/Drink And How To Prepare It.

How to Select a Good Watermelon with pictures (Updated)

Is It Good To Drink Palm Wine?

10 Wonderful Benefits of Tomatoes And Tips For Buying Them

How to Select a Good Watermelon with pictures (Updated)

How to Select a Perfect Cantaloupe

5 Amazing Reasons why you should Eat African Star Apple

ABOUT US
We are an Agricultural Company that is into livestock (poultry), fish and crop production in Nigeria and Ghana. We are also dedicated to help other agricultural producers and processors reach millions of customers around the world with their produce, products and services online.
Contact us: contact@makmigrofarmsltd.com
FOLLOW US
© 2018. All Rights Reserved | makmigrofarmsltd.com